Skip to content
Posted on April 1, 2019April 4, 2019 by lifethroughgreentintedglasses

*To gain a greater appreciation for this post, be sure to read the previous “Evolutionary Mash-ups” posts about giraffe necks, dragonfly wings, and chameleon tongues. I take the best adaptations natural selections has to offer and combine them into one animal. At the end of this post I will combine all four “Evolutionary Mash-ups” animals into one overwhelming beast.

I take a deep breath as I relish this moment. The warm sun kisses my face, fresh air with a tinge of salt fills my lungs, cool ocean water caresses my chest, and soft sand massages my feet. I am weightless in the deep blue ocean, all the stresses and cares of the world float away as I take a much needed vacation in Hawaii. I want to bottle up this moment, hold on tight, and never let go. My ultimate relaxation is interrupted by a sharp stinging sensation on my leg. I look down into the crystal clear waters to find a Hawaiian box jellyfish. Feelings of extreme comfort are replaced with an overwhelming sense of fear and dread. I quickly try to escape, only to be inflicted with additional stings. Relentless pain surges through my body and my breathing becomes incredibly labored. The shore is so close, but my movements become sluggish and it seems as though I am doomed to die in the shallows of the ocean. I try calling out for help, but fluid begins to fill my lungs as I sputter out incomprehensible words. I finally collapse onto the sandy shore. The last thing I see before losing consciousness is large red welts dotting my legs.

Confession time. I have never been to Hawaii. I am a brand new teacher with a young family so a vacation to Hawaii is a little outside the boundaries of my budget. I fabricated the story above to try and describe just how dangerous box jellyfish venom can be. I do not think I did it justice. This floating mass of jelly seems innocent and even cute at first, but is regarded in the animal world as one of the most deadly creatures. The box jellyfish has even adapted a jet propulsion system, capable of moving at speeds of  four knots in the water. They lack brains, bones, a spinal cord, and other things necessary to create an intelligent organism; but what they lack in intelligent systems they make up for in deadly venom.

The Australian Box Jellyfish is capable of delivering lethal venom in less than a second upon contact with human tissue and can even cause death in under five minutes. The venom, once inside a human or other animal, quickly goes to work attacking the heart, nervous system, and skin cells, threatening to shut down vital organ systems within a matter of minutes. Each tentacle on an Australian box jellyfish can contain up to 5,000 stinging cells. With a total of 15 tentacles, that’s 75,000 stinging cells! The venom inside the stinging cells contain a toxin know as “porins.” These porins, or pore-forming toxins, punch holes into the cells they come in contact with. Once the toxins reach the blood cells, they punch holes in those cells causing the red blood cells to rupture. Once enough RBCs (red blood cells) rupture, this is a downward spiral leading to cardiovascular collapse. All of this damage from a floating ball of goo!

Though the Australian box jelly has been named the “the most venomous animal on Earth” by the National Science Foundation, it is important to note that, in some ways, the box jellyfish is actually not that special. Based on its size, the Australian box jellyfish may be the most venomous animal. But certain members of the phylum arthropoda, like spiders, scorpions, and centipedes, could be just as dangerous if they were bigger in size and had a more effective way of delivering large amount of their toxins.

We left our marvelous evolutionary creation with a giraffe’s body, a dragonfly’s wings, and a chameleon’s tongue. It is sitting firmly on top of the world of herbivores for sure. But now let’s give it Australian box jellyfish tentacles and see what happens… It now has a supreme defense mechanism! Before it did have super fast wings from a dragonfly, helping it to escape from any predator. However, there was still a possibility of a predator sneaking behind it while it was feeding and ambushing it. With box jellyfish tentacles, predators would learn very quickly not to hunt this prey. Even slight contact with this giraffe’s tentacles would send lethal toxins throughout the predator’s body, slowing their movements significantly and letting the giraffe fly away in a hurry. Depending on how much toxin the predator received, it may have been the last hunt it ever went on before the abrupt end to its life.

Now for the moment you all have been waiting for… the big reveal! March’s evolutionary mash-up: the giraffe with dragonfly wings, chameleon tongue, and jellyfish tentacles. Below are artists’ interpretations of this evolutionary mash-up. One, the one with the tongue wrapped around the giraffe’s neck, was done by a student of mine. The other two are creations from my niece, and artist, Katie. She does FANTASTIC work and I wanted to show off her artistic abilities as well. Both of my artists for this series of evolutionary mash-ups did a WONDERFUL job and I thank them for their hard work. I hope you enjoyed this Evolutionary mash-up and stay tuned for the next installment in the coming months. 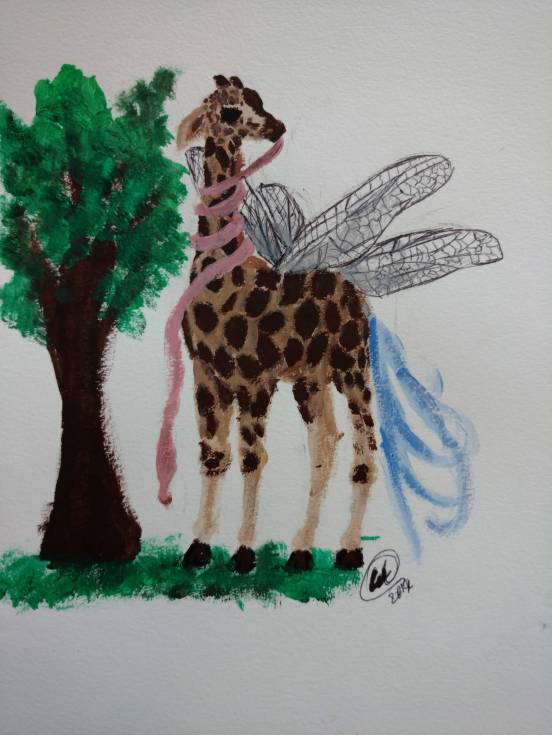 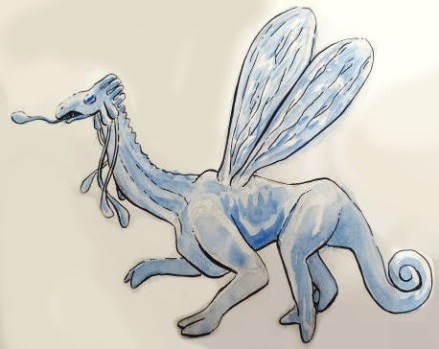 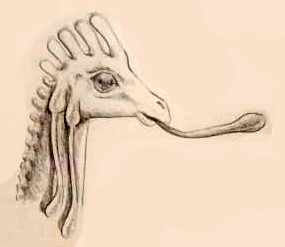 If you read this whole blog post, you are my hero! Thanks for reading. Please feel free to leave me a comment and feedback below. Also, let me know if there is any particular science topic you would like me to look at “through green tinted glasses” and I will write about it. Or, if there are animal adaptations you would like me to feature in my next series of evolutionary mash-ups, comment below!

*PS. The book I cited above, Venomous, is a FABULOUS book. I highly recommend it if you are even remotely curious about toxins and how they work. Also, I realize none of the pictures above are actually Australian box jellyfish… these were just jellyfish images I could find for free use…