The assassin lies in wait for its target to draw near. He has found the perfect cover, hiding motionless beneath the sand, as his target approaches. Once his target is within reach, the assassin uses extreme muscle control to inch a poison tipped harpoon toward his target. Closer and closer the harpoon draws, laced with only the most lethal of toxins the assassin created himself. Once the harpoon makes contact with its target, it will deliver sweeping paralysis making the assassin’s job all too easy. Finally the harpoon is ready to deliver its paralyzing strike. Within a matter of seconds, the assassin strikes its target with the harpoon, yanks the target towards him, and emerges from his sandy cover SWALLOWING ITS TARGET WHOLE. You see, the assassin is not only very hungry, but the assassin is actually a cone snail and the target is a fish.

The cone snail, measuring in at about 6 inches in length, is a small unassuming mollusk that packs a big punch. So how does this little guy devastate its prey? Usually it starts with its foot, the slimy underside of the snail, anchored to a rock or reef hidden out of sight. Its shell, which covers its entire body, protects it from predators that may stumble upon it while it patiently waits for its next meal. Its siphon, a nose-like organ that pokes out the top of the snail, is used to sniff out the prey while it patiently waits. The venom bulb inside the snail creates the perfect venomous concoction for its prey and sends the venom cocktail through the venom duct. Once the venom has passed through the duct, it is inserted into the harpoon. This harpoon is created in the radular sac and is loaded into the proboscis for lethal, venomous strikes. After the snail has spotted its next victim, its proboscis slowly makes its way near the prey where it unleashes the toxic harpoon into the prey for a paralyzing strike. Within seconds, the snail’s meal is unable to move and the cone snail is free to engulf its prey whole through its rostrum for later digestion.

I think it is safe to say that if you spot a cone snail approaching you in a dark alley you should run for your life… but don’t take my word for it! Let’s take a closer look at the most venomous cone snail on the planet, Conus geographus. C. geographus resides in the reefs of the Indo-Pacific. Its shell is prized among collectors, but you best make sure there is not a cone snail living in that shell first! This particular cone snail has been the cause of several human fatalities, with a case-fatality rate of 70%! If you are unfortunate enough to be harpooned by this cone snail (and that is a BIG if since the number of cases are very low), you would succumb to sweeping paralysis within minutes and your chances of survival would quickly diminish.

But this is a story of not just the evil Mr. Hyde, but also the benevolent Dr. Jekyll. If the lethal venom of the cone snail is the Mr. Hyde, then the antibiotics and medicines created from the snail venom is the Dr. Jekyll. Scientists have already manufactured a pain killer that is upwards to 10,000 times more effective than morphine without the addictive properties that morphine has. They even have made a cream to treat wrinkles out of cone snail venom! Scientists are still working on cone snail venom medicines and are hoping to create remedies for various cancers and diseases such as Parkinson’s disease.

Now for the evolutionary mash-up finale, let’s revisit our highly adapted Northern Lampfish. Our lampfish already has electricity-producing cells to give both predator and prey a shock. And let’s not forget about the recently added Coconut Crab claws which give it an added weapon for larger prey. But if we give our lampfish a venom-tipped, harpoon-like tooth as well, it becomes the untouchable lampfish. If we give the lampfish a venom mixture, or conotoxin, specific to larger predators like whales or sharks, then this lampfish really becomes invincible. If we consider the size of the snail and size of the lampfish, the lampfish could have a bit bigger dosage of venom than the snail since it is a bigger size and thus pack a bigger punch than the snail. However, there are two sides to this underdog story. These lampfish are a major source of food for many ocean species and if they are no longer able to eat the lampfish, they may go extinct if they don’t find a different food source. On that same coin, if predators favor a new prey instead of the Northern Lampfish, than that new prey could be on the extinction chopping block. Also, if the Northern Lampfish were to have all of these unique adaptations, its body would have to work very hard to produce the venom, the electricity, and the muscle power for them to function. These adaptations look good on paper, but may not actually work put together in one organism. But it sure is fun dream! 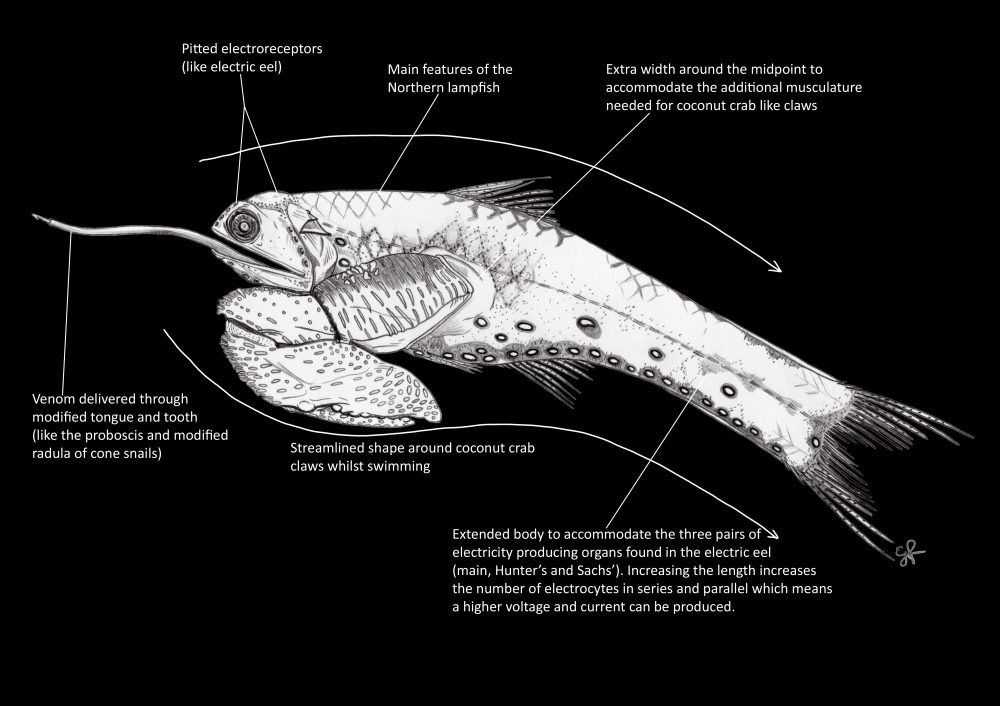 So there you have it, the ultimate prey has now become the untouchable prey! Here is an artistic rendition of our newly created organism by the wonderfully talented Emily Jane Foster (the images above and below this paragraph). A HUGE thank you to the AMAZING  Emily for contributing the artwork for this post. If you like her work, you should visit her Etsy shop called EmilyJaneArtStudio. Also, see the links below for my work cited and additional reading if you are interested in learning more about the cone snail and its medical implications. 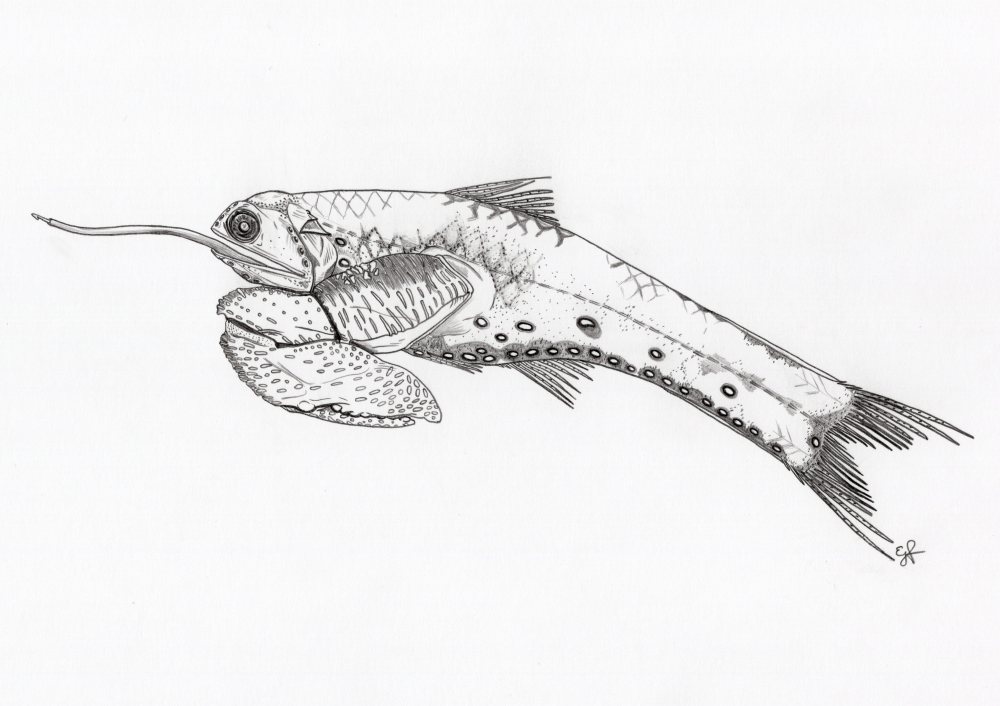 How Do ‘Killer Snails’ Kill Their Victims?

If you read this whole blog post, you are my hero! Thanks for reading. Please feel free to leave me a comment and feedback below. Also, let me know if there is any particular science topic you would like me to look at “through green tinted glasses” and I will write about it.