Skip to content
Posted on July 6, 2020July 7, 2020 by lifethroughgreentintedglasses

Northeast of Hyrule Castle lies Death Mountain. It is called “death” for a reason. Consider the sweltering heat and lava that comes from the incredibly active volcano, add in the noxious, smoke-filled air and sprinkle in the lifeless rocky terrain and you get a hostile ecosystem unfit for living creatures. Unless you’re a Goron. These ancient lifeforms have evolved key adaptations that help them not only to survive in such harsh conditions, but to thrive in them. 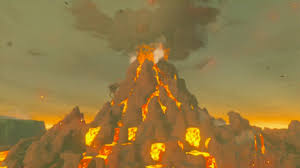 It starts with their massive physique. Gorons are large creatures, measuring in at about two times the height of an average Hylian (the Zelda equivalent of a human) and 3-4 times the weight of an average Hylian. The majority of their body mass is composed of rock-like growths on top of huge skeletal muscle groups. The largest muscle groups in an average Goron are the abdominal muscles and the forearm muscles. The abdominal muscles; particularly the rectus abdominis, external oblique, and serratus anterior muscles, are essential for Gorons to quickly curl into a ball for locomotion and self defense. The Goron forearm muscles, combined with massive shovel-like hands roughly twice the size of a Hylian’s head, are used for digging into the mountain in search of food, shelter, and ore. Looking at the average Goron, you may be surprised to see biceps, triceps, and leg muscles (particularly the quadriceps, hamstring, and gastrocnemius muscle groups) that shrink in comparison to the abdominals and forearms. Those other muscle groups are simply not as important when it comes to Goron survival. Unless you are a Goron leader or warrior, they tend to have large biceps as well likely for combat purposes. 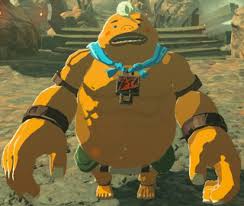 If you ask any random Hylian what a Goron eats, they will tell you, “that’s easy, they just eat rocks.” But in order to provide them all the essential nutrients for survival, Gorons don’t just eat any ordinary rock. There are many different kinds of rocks that contribute to their nutrition in various ways. Let’s start with the most common igneous rock found on Death Mountain: basalt.

Basalt is a silica-rich rock that forms from Death Mountain lava which rapidly cools after an eruption (called “extrusive igneous rocks”). This is a very common igneous rock that can be found all over the slope of Death Mountain and is a staple to a Goron’s daily diet. In fact, a Goron could walk right outside it’s front door and likely find good basalt to eat within minutes. The key component of basalt which the Gorons need for survival is mostly silica, but trace amounts of calcium, sodium, potassium, aluminum, and iron are also useful components of basalt. The silica will be discussed later and is used to make energy as well as the rock-hard growths that cover their bodies. 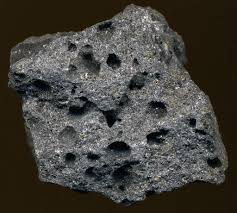 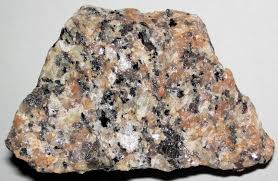 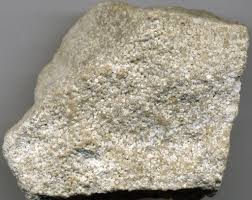 The next important part of their rock diet is also an igneous rock, but one that forms quite differently. It’s called granite. Granite forms from cooling magma deep inside the earth. Unlike the quick cooling of lava to form basalt, granite cools very slowly and forms large mineral crystals in the process. One of these minerals is a very important one for the Gorons– quartz. Quartz is composed of large amounts of silica. Even though Gorons get silica from basalt, granite contains a much larger amount of silica. For a Goron, eating a large granite rock is equivalent to eating a day’s worth of basalt. So why don’t the Gorons focus on granite hunting instead of basalt hunting? Granite is much harder to find and Gorons actually find the large, hard crystals in granite less palatable than the softer, tastier basalt. But because granite produces harder rock-like growths faster, Goron warriors will hunt for granite to make them tougher and prepare them quicker for battle.

The final rock staple found in the Goron diet is limestone. Limestone is a soft sedimentary rock that forms from the accumulation of calcium carbonate that is compacted and cemented together by water and other weathering processes. Deep in the heart of Death Mountain lies a vast network of caves known by the locals as “Dodongo’s Cavern.” The calcium carbonate rich water that continues to flow through this cavern helped the form the limestone that fills every inch of the caves. Gorons regularly go to these caves to harvest limestone rock. Besides the calcium which Gorons need to keep their bodies rock-hard, limestone also contains another valuable resource which all living things need to consume daily–water. Sedimentary rocks like limestone can hold large amounts of water within their soft, porous bodies. It is very important for Gorons to eat limestone daily since liquid water is typically unavailable on the hot dry slopes of Death Mountain.

The digestion of rocks is a unique process held solely by the Gorons, no other creature in Hyrule has that ability. It starts with their big heads which contain massive mastication (chewing) muscles. In fact, their chewing muscles are 5 times the size of a Hylian’s. These muscles, combined with large calcium-fortified teeth and saliva containing highly concentrated oxalic and carbonic acid, allow the Gorons to begin breaking down rocks in their mouths. Organic acids like oxalic and carbonic acids break down rocks in the natural world and are especially effective at breaking down the softer limestone rock. This allows Gorons to digest limestone quickly to absorb water immediately after consuming the rock.

After being initially broken down in the mouth, the rock bits then travel through the Goron’s extra large esophagus. The Goron’s esophagus is lined with grooves that give it an abrasive surface. Their esophagus also contains glands that secrete more concentrated carbonic and oxalic acids. The acid covered rock bits get broken down even more as they rub up against the abrasive esophagus surface as they travel to the stomach. The Goron stomach contains highly concentrated hydrochloric acid, similar to Hylians, which finish breaking down the rock bits. As the rock sediment travels through the Goron intestines, essential molecules are absorbed like potassium, calcium, magnesium, sodium, silica, and water. 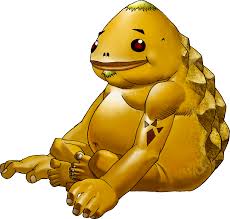 From their diet of rocks like basalt, granite, and limestone, Gorons utilize tons of silica and lime to build up their hard, rock-like growths found mostly along the dorsal side of their bodies. Silica, lime (ground up limestone), water, and other trace minerals like aluminum, iron, and magnesium, are transported from the digestive system to hollow pockets along the dorsal (back) side of the Goron where they can mix together and quickly solidify to form hard concrete chunks. Since exposure to air is an important part in the creation of concrete, scientists hypothesize that the Goron’s skin which covers these pockets contains soft muscle tissues which periodically open and close allowing outside air to get through the skin. Having large rocky growths has many advantages, but if the Gorons ever encounter large bodies of water, they keep their distance. The dense Gorons would sink like a rock and may never come back up again.

Excess silica that is not used for rocky growths is used to create energy. Gorons have special organelles inside their cells that can break down silica with the help of oxygen to create ‘energy’ molecules. However, silica makes a very inefficient form of energy. The process of making silica energy is slow and the energy itself is short-lived. Thus, Gorons lead a very sedentary life. Most Gorons in a village are found resting, sitting, or sleeping. But do not call a Goron ‘lazy,’ this is not a lifestyle choice, this is a consequence of chemistry! The good news for the Gorons is that for transportation and self defense, rolling around in ball form is very fast and uses up very little energy.

To prove those uncultured Hylian wrong again, Gorons do not just eat rocks as part of their diet. They also harvest vast amounts of bomb flowers to use in their cooking. Bomb flowers are an endemic plant species that only grow on Death Mountain. The fruit of a bomb flower contains highly explosive chemicals that, when ignited with fire or with a large amount of energy, will cause a massive explosion. The Gorons use the green leafy part of the bomb flower to make their “Goron Spice” which they sell to travelers claiming it will help them to endure the heat of Death Mountain if they use it in their cooking. They also use bomb flower leaves in their own everyday cooking for such dishes as “Rock Roasts” and “Lava Soup.” They also carefully harvest the explosive fruit to help them carve out the mountain in search of rocks and minerals. They have been known to sell the explosive fruits to young Hylians wearing green tunics on adventures to save princesses.

So far, we have only scratched the surface of the science behind the beast known as “Goron.” They deserve a much deeper look than just simply the food they eat, their metabolism, and their physical stature. Next time, join me as I discuss the Goron’s development of defense mechanisms, their life cycle, and the development of their intelligence.

**ABOUT THE RIGHTS AND INTERPRETATIONS OF THIS POST: Most of the images and characters in this blog post are the property of Nintendo. I do not own the rights to these images or characters in this story. However, the science in this blog post is not found in the Nintendo video games and is simply a creative interpretation of how these creatures could actually exist. This story is fictional. I hope you enjoyed my creative interpretation!

**Leave me a comment if you would like to see more scientific interpretations of other video game characters. Or just let me know how you think I am doing as a science writer, storyteller, and entertainer!

One thought on “The science behind a video game character: Zelda’s Gorons”