Skip to content
Posted on June 25, 2020June 26, 2020 by lifethroughgreentintedglasses

*For an introduction to this story and to read Part 1, go to this link: lifethroughgreentintedglasses.blog/2020/05/30/the-battle-for-the-great-acacia-part-1/

Espionage had never been a successful tactic for outsiders trying to steal the Great Acacia tree’s resources. The huge, thriving ferruginea colony monitored every inch of the tree from sun up till sun up again. But this time, they were not dealing with some bright green leafhopper jumping in to quickly sneak some nectar. This time, an ant-mimicking arthropod well equipped for infiltration and a quick getaway was taking advantage of the Great Acacia tree, and it was Myrmex’s responsibility to stop it.

Before sunrise, Myrmex put down a special pheromone message for her soldiers patrolling the Great Acacia tree throughout the day. “Be on the lookout for any signs of an intruder. If you see anything suspicious, especially near the beltian bodies, report to me immediately.” Myrmex had last spotted the mimic stealing from the Great Acacia tree’s beltian bodies, special packages of nectar attached to leaf tops.

As the general of the Great Acacia tree’s ant colony, Myrmex had a duty to protect the tree from any and all types of invaders. This mimic was not going to get the best of her. Earlier, Myrmex had done some preliminary investigations herself and had found some valuable clues. A silk drag line dangling from a leaf. The same type of silk line at the base of the tree. There were large imprints on the beltian body that Myrmex had spotted the mimic eating from. The mimic had an excellent escape strategy and large mouth parts.

Just as Myrmex was on her way to investigate the scene of the crime again, a soldier hastily approached. With a few quick taps of her front legs against the branch, the soldier signaled Myrmex to follow her.

As they marched towards the next piece of evidence, Myrmex couldn’t help but notice the grandeur of the Great Acacia tree. Thousands of beltian bodies glistened in the morning sunlight and bobbed up and down as the small green leaves danced in the wind. In that way, the tree looked heavenly. In another way, the tree looked hellish as thousands of ants marched up and down the tree, in and out of jagged thorns that the ants use as homes. Despite the contrast, the Great Acacia tree was beautiful to Myrmex and to think that some intruder was taking advantage of the tree infuriated her.

Myrmex and the soldier came to an abrupt halt in front of an odd looking leaf. This acacia leaf was covered in the same silky material left by the mimic. Upon closer inspection, it was multiple leaves clumped together by the silk to form a leaf case. Myrmex and the soldier investigated the area near the crime scene but there was no sign of the mimic. Just as Myrmex was about to climb into the leaf case for further investigation, they felt distant vibrations followed by familiar pheromones from nearby ants. The Great Acacia tree was under attack.

A vibrant yellow grasshopper with orange and red markings two branches below Myrmex was eating acacia leaves for lunch. Soldiers near the grasshopper began attacking the intruder, but the grasshopper used its long, powerful hind legs to jump towards a different snack out of the reach of attacking ants. Unfortunately for the grasshopper, it chose to land on the branch with the colony general on it.

In the process of crashing to the ground, the grasshopper lost an antenna and a front leg. It was forced to a crawling, stumbling retreat. Myrmex signaled to her ground troops to finish off the invader and salvage any nutritious parts from the grasshopper for gathering. Whether friend or foe falls in battle, all can be salvaged for food. The more food that can be salvaged from outside sources, the less strain that’s put on the Great Acacia tree. Since the tree had given Myrmex and the rest of the ferruginea ants everything, the least they could do is practice some conservation. 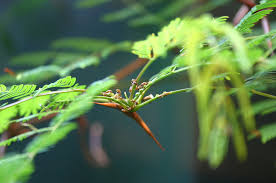 As the ants were performing a routine march to confirm that all intruders had been taken care of, Myrmex noticed a larger, furrier ant snacking on beltian bodies nearby. The mimic. The general stealthily approached the mimic. Last time her fast, angry approach scared the mimic away. She slowly crept within striking distance of the mimic. Sweet nectar dripping from large, hairy mandibles, the mimic kept feeding unaware of the general’s presence. Like a lion stalking prey, Myrmex waited for the opportune moment to strike. Three. Two. One. Myrmex tackled the eight-legged intruder. Writhing in alarm and shaking violently, the mimic tried desperately to break free but the general held a tight grip, clutching the mimics course body hairs with her mandibles. Many tiny eyes glared at her. Eight legs, fur-covered body, large mandibles, and many eyes could only mean one thing. Myrmex was wrestling with a spider, an ant-mimicking spider.

Just as Myrmex was about to chew off some of its legs, she caught wind of a strong pheromone that was climbing up the tree. An unknown ant colony was invading the Great Acacia tree. The general now had a decision to make. Waste time dealing with the spider while the invading ant colony wreaks havoc or let the evasive spider mimic go free again and get a head start on the ant invaders.

Myrmex chose plan C. Before letting the spider go free, Myrmex tagged it with a special pheromone. A tracking chemical so Myrmex’s soldiers could hunt for the mimic later. The general didn’t even watch as the spider drifted away on a silk-string parachute, she raced toward the invading ant army.

There are some ant colonies of differing species that team up and form alliances. But ants invading the Great Acacia tree were rarely friendly. They usually were looking to take over the Great Acacia tree and take advantage of its vast resources. This invading ant colony appeared to be no different. When Myrmex arrived at the pheromone source, a battle was already underway.

The base of the tree was a rolling mass of orange ferruginea ants and larger blackish red ants. Fortunately, the ferruginea ants greatly outnumbered the invaders, but these invading ants were formidable foes. Their heads were much larger than the ferruginea ants along with mandibles triple the size of the general’s. The invaders used their larger size and powerful mouth parts to cut through ferruginea soldiers as easily as chomping through nectar. 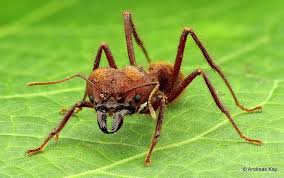 Avoiding the head of the invading ants, Myrmex used her quickness to get behind the intruders and deliver potent stings from her stinger. To her right, a ferruginea soldier crumpled as an invader crushed her thorax with its powerful mandibles. To her left, a soldier and an invader were in a head lock, mandible to mandible, which quickly ended as the invader ripped the soldier’s head clean off. Myrmex continued to creep behind the enemy line to unleash her stinger. Sting, sting, sting. An invader crumpled. Sting, sting, sting. An invader fled the battle field. The soldiers eventually followed the general’s tactics. With more and more ferruginea reinforcements joining the battle every second, the tree’s ants were able to use their toxic stings to gain the upper hand. Pretty soon the invading ants were fleeing and the ferruginea ants celebrating. But the general was hesitant to celebrate just yet, she felt like that would not be the last time they had to deal with those ants.

With the invading ant army in full retreat and the spider mimic being hunted by ferruginea soldiers, the general had every right to rest and recover. But the much needed ‘R and R’ would have to wait. Guards from the Queen’s chamber rushed down to the base of the tree to deliver a grave pheromone message to the general. The Queen was dead.

Confusion, sadness, and anger were the dominant emotions that swirled around Myrmex’s head. She replied with a series a foot taps and antenna rubs, “was it the invading ants? The mimic? Some other invader?”

The guards replied with three firm taps against the tree, “no, it appears she died of natural causes.” Myrmex thanked the guards, rubbing her antennae against there’s, and marched towards the Queen’s chambers.

As she made her way to the top of the tree, Myrmex recalled all the positive interactions she had had with the Queen. The Queen had been the first to encourage her as a brand new general. The Queen had instilled in the general much hope and confidence. But Myrmex also knew that this was part of the cyclic life cycle of the colony and she eagerly anticipated a meeting with the new up-and-coming queen. Her attention suddenly shifted to some dead and decaying leaves near the Queen’s chamber. It being early spring, this was a strange sight. Was the tree mourning the loss of the Queen? Or was the tree still sickly even though the mimic and other invaders had been taken care of?

Right when the general reached the Queen’s chambers, other guards were waiting to intercept her. This time they were larval chamber guards with more bad news. Something is making the Great Acacia tree sick so that it is not producing enough nectar to feed all the larva in the chambers. If the tree’s condition does not improve soon, larvae will die and the colony will shrink.

With the mimicking spider under control, Myrmex wondered what else could be making the tree sick. Could the invading ant colony have something to do with this? Rest would have to wait, the general began gathering troops to mount another investigation. 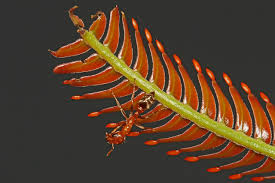 Thank you for reading my second installation of my short fiction story “The Battle for the Great Acacia.” If you enjoyed reading it, or if you have any questions, drop me a comment. I would love to hear about your reading experience! Stay tuned for the part 3 of this story within the next couple of weeks.

Sources if you are interested in learning more about the ant/acacia relationship. I used information from many of these awesome sources!

One thought on “The Battle for the Great Acacia Part 2: The Mimic”