Skip to content
Posted on June 16, 2020July 18, 2021 by lifethroughgreentintedglasses

In a land filled with a vast underground network of pipes and Bowser-busting plumbers, it can be hard for a plant to lay down roots. Especially when fireballs periodically scorch the landscape. But the Piranha plant has developed special adaptations to not only survive, but to become one of the most dominant plants in the Mushroom Kingdom.

The tall, oddly-shaped trees that fill the hills of Mushroom Kingdom dominate the skyline and absorb the vast majority of the available sunlight. Without sunlight, plants cannot make food for themselves. For a small ground plant like the Piranha, this is a problem. But some key mutations helped the Piranha plant find a niche on the ground, and underground, in the Mushroom Kingdom. Instead of relying on sunlight to make food, a process called “photosynthesis,” the Piranha plant feeds on other creatures. Sugars from eating other living things can be broken down with the help of Oxygen to create energy. Early on, these carnivorous plants would feast on small Goombas. But as they developed sharp teeth and venomous saliva, the Piranha plant preferred larger snacks like koopas or even the Super Mario Brothers to supply their precious carbon. The other part of that energy equation–Oxygen–is absorbed through their slimy skin, similar to how a frog breathes.

Without eyes, ears, a nose, or any other sensory organ to find food, Piranha plants rely on tiny sensory hairs that cover their bodies. These hairs are composed of sensors that detect movement (called “mechanoreceptors”) and sensors that detect chemicals (called “chemoreceptors”). Once these sensors detect physical movement, like a Goomba walking on top of a pipe, they send electric signals throughout the Piranha plant’s body which then triggers an attack reflex, just in time to jump out of its pipe and chomp on an unsuspecting Goomba. Similarly, these hairs can pick up chemicals produced from nearby prey and elicit the same predatorial response.

Before the Mario-biting Piranha plant developed sensory hairs to detect movement on it’s pipe home, it first had to develop a relationship with the pipes. Soon after the change from photosynthesis to hunting for its own food, the plants developed a mutation that made the endless underground pipe network a home instead of a hindrance. The plants form a unique bond with the pipes.

The iconic green pipes of Mushroom Kingdom did not start green. This ancient network of plumbing started as orange-red copper pipes. Over time, the copper metal in the pipes turned green through a process called “oxidation.” In this process, Oxygen gas and other molecules in the atmosphere tear away some of the electrons in the copper metal and form new bonds with the metal. Molecules from the atmosphere combine with the copper metal to form a green coat around the outside of the pipes. 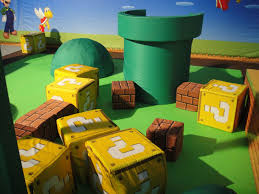 This is where the Piranha plant comes into the equation. The root tips of the Piranha plant are coated with Beryllium anions (Beryllium molecules with extra electrons). Right when oxidation occurs on the copper pipes, the Piranha plants latch on to the oxidized pipe and form a Beryllium-copper bond before other atmospheric molecules have time to fuse to the pipe. Since the Beryllium root tips have extra electrons and the copper pipe just lost electrons through oxidation, it readily accepts the metallic root tips. Sometimes, the plant will even spit a fireball near the reaction site to add a little extra energy to get the reaction started. This newly formed bond is super strong, Bowser himself couldn’t even rip the Piranha plant from its pipe home. Coincidentally, this same Beryllium-Copper alloy is used to make Mario’s strong, sturdy tools he uses for plumbing and fighting bad guys.

The Piranha plant is known throughout the kingdom as a fierce predator. Upon sensing incoming prey, the plant springs to life. Its stem is made of long chains of organic molecules called “polymers.” These polymers cause the Piranha’s stem to stretch up to twice its original height. When the plant is resting, these polymers relax and fold on top of each other. When an electric signal travels from the sensory hairs cells throughout the body of the plant, the polymer chains begin to stretch preparing the Piranha for a decisive attack with its sharp teeth or its noxious breath. If you see Mario, tell him to stand at least six feet away from an unknown pipe and to have his hammer ready. 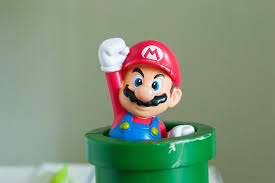 Though the Piranha plant is a fearsome predator in the Mushroom Kingdom, defensive adaptations become very important for the plant especially when plumbers are bouncing around. One notable defense mechanism is its ability to spew harmful substances.

Towards the back of the Piranha plant’s mouth are two neighboring compartments separated by a removable flap of tissue. Both of these compartments contain harmless chemicals, but when combined they make very dangerous chemical compounds. If the plant senses danger, the tissue flap is lifted, causing the chemicals within the two compartments to mix with its enzyme-rich saliva, and spew out a newly formed toxic compound at the intruder. It’s famous ‘poison breath’ is formed when the chemicals “hydroquinone” and “hydrogen peroxide” are mixed with its saliva. Depending on the Piranha plant species, there may also be plants that mix different oral chemicals to form a fiery, explosive compound or a freeze-on-contact compound. Mario should bring lots of star power into a battle with some of these bad plants.

Other defense mechanisms can be observed as physical features along the outside of its body. Along with its sharp teeth, some species of Piranha have sharp thorns that cover their stems and even around the outside of its head. Other species use a thorn covered spherical fruit they produce to defend the opening to their pipe homes and spit out at incoming threats. All species of Piranha plants use “aposematic coloration,” or warning colors, to deter unwanted guests. When potential predators see the characteristic bright red, yellow, or purple coloration with white polka dots, they know to stay away or else they may get a face full of toxic spit-up. 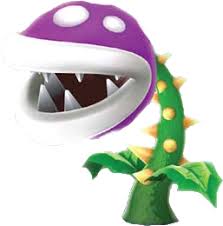 To ensure a large number of offspring survive and dominate the kingdom in the next generation, the Piranha plant has developed some unique reproductive adaptations. Like most plants, Piranha plants can reproduce by spreading its seed to other Piranha plants, or by creating exact copies of themselves. And you thought one Piranha plant was bad!

In creating exact copies of themselves (sometimes called “cloning” or “asexual reproduction”), the Piranha plant produces spores- single red and white polka dotted cells capable of growing into a full grown clone of the original plant. If the Piranha plant senses no other nearby Piranha plants to spread its seed to, it will produce hundreds of tiny spores which float to the ground. Upon reaching the ground, the spores obtain nutrients from chemicals and microbes in the soil until they grow into their infant form, a small white plant known as a “nipper” in the Mushroom Kingdom. You know, those little white beasts that hang out on the ground near pipes and constantly chomp at the air.

Nipper plants have developed sturdy, springy stems that allow them to hop about in search of a suitable pipe home. Nippers have mouths which allow them to eat their favorite treat, baby Goombas, as they search for pipes. Strange enough, Nippers have light-sensing organs similar to eyes on their heads while their adult version does not. Nippers need light-sensing organs as they travel around in search of pipes so they can hide from potential predators as well. Adults do not need to sense light as they already have a safe hiding place in the pipes and can sense other living things via sensory hairs. Nippers have very few sensory hairs. Upon finding a suitable pipe home, the Nipper will guard the pipe until it grows into an adult Piranha plant. As an adult, the Piranha plant can then use its fully developed metallic roots to bond with the copper pipes and form a permanent habitat. If you see a Nipper plant near a pipe, best to leave it be. Those little guys will fight to the death in defense of their new home.

Besides creating Nipper plants which develop into clones of the parent plant, Piranha plants can also spread their seeds to form genetically different offspring. Of course, the seeds must find their way to a different Piranha plant for successful reproduction. Piranha plants pack their pollen into thorny spherical fruits which it spits out at enemies. These thorny fruits will sometimes stick to unsuspecting creatures who encounter the clever Piranha. If a different Piranha plant encounters a poor creature with this thorny fruit stuck to them, the plant will promptly eat the creature along with the thorny fruit. Upon consumption of the fruit, the fruit dissolves and reveals the pollen which mix in with the eggs in the egg chamber found at the base of the Piranha plant’s digestive tract. From this mixing, the new seed is formed which will eventually form a new, unique Piranha plant. Someone should warn Luigi that he has a thorny fruit attached to his overalls.

There are still adaptations exhibited by different species of Piranha plant that baffle scientists to this day. For example, some Piranhas have left the pipe life all together and have taken up walking using leaves as a modified foot. Also, some Piranha plants leave the pipe in a different way. They literally ‘fly’ out of the pipe, unattached to the pipe, and attack enemies in midair. The Piranha plant is constantly evolving to adapt to its ever-changing environment. But there is one thing that will never change about them… Their strong appetite for plumbers. 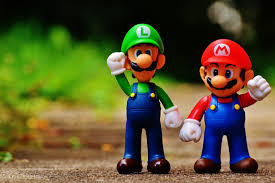 **ABOUT THE RIGHTS AND INTERPRETATIONS OF THIS POST: Most of the images and characters in this blog post are the property of Nintendo. I do not own the rights to these images or characters in this story. However, the science in this blog post is not found in the Nintendo video games and is simply a creative interpretation of how these plants could actually exist. This story is fictional. I hope you enjoyed my creative interpretation!

**For a display of the Super Mario World Piranha plant in action, check out this video (Minus the running and jumping in a pot, this video matches my story!): https://www.youtube.com/watch?v=ZpGtWmv2GPw

**Leave me a comment if you would like to see more scientific interpretations of other video game characters. Or just let me know how you think I am doing as a science writer, storyteller, and entertainer!

2 thoughts on “The science behind a video game character: Super Mario’s Piranha Plant”